Beginning today I will write and post weekly notes about Bellicourt Tunnel: The Crowning Battle of the Great War. Some will be comments about the book, some comments by writers about it, accounts of decisions I made, obstacles that imagination overcame, and often a photograph.

Please follow, if you will, and share with friends and encourage them to read and share, too. Let me know what thoughts what I write brings to mind. I write stories because I want readers to pass a few hours enjoying a world of imagination that reading brings to the mind’s eye and ear. Without looking for too strict a definition, I would call Bellicourt Tunnel a fantasia. It blends fact, fiction, and fantasy (if help from the revenant—souls returned from the dead—and angels and demons can be considered fantasy.)

The book begins with an epigraph, a quotation from Sir Arthur Conan Doyle’s book Adventures and Memories. 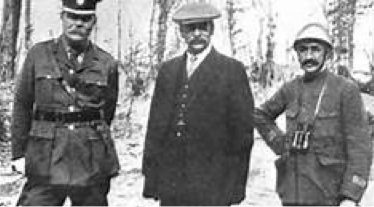 Doyle often visited the war as official correspondent for the government. He was its chief propagandist.

“I had not expected to see any more actual operations of the war, but early in September 1918 I had an intimation from the Australian Government that I might visit their section of the line. Little did I think that this would lead me to see the crowning battle of the war.”

Here’s the behind the scenes story.

Once I decided that I would write Bellicourt Tunnel as a sequel to The Angel of Mons it meant that I would bring several characters forward. Tommy Atkins, St. George, Joan d’Arc, angels, and Sherlock Holmes are fictional creations who I would write about again. Since Winston Churchill and Sir Arthur Conan Doyle, also characters in the Angel, were real people, I intended to find out where they were around the time of the battle. I expected to need to create a pretext for Doyle to have something to do with this story, as I had to with Winston Churchill. At the University of South Carolina Thomas Cooper Library I went to the shelves of Conan Doyle material and read along the spines. I came to a book entitled Adventures and Memories, looked at the copyright date—1924—after the War. Maybe here I could find out where he was around the time of the battle.

I read down the chapter titles and came to “Breaking the Hindenburg Line.” This was the Battle of Bellicourt Tunnel! Doyle wrote: “I had not expected to see any more actual operations of the war, but early in September 1918 I had an intimation from the Australian Government that I might visit their section of the line. Little did I think that this would lead me to see the crowning battle of the war.”

That he was present at the Battle of Bellicourt Tunnel, actually making his way, guided, onto the field of battle I took as an auspicious sign for my story .

Then he wrote: Under our very eyes, was even now being fought a part of that great fight where at last the children of light were beating down into the earth the forces of darkness. It was there. We could see it. And yet how little there was to see! This passage is perhaps as significant as the first for the novel. Because in the Angle of Mons Doyle was initiated into the “Golden Arrows of God,” he experiences and sees the divine battle taking place along with the human battle. The above passage hints at that.

In Chapter 18, “Sir Arthur Conan Doyle and Tommy Atkins” Doyle testifies to what happened when he was at the battle, now that he is free to explain.

More and different to come next week. Please, if you have questions or would like to have me write about particular problems I encountered (these are always a surprise, and the solutions even more of a surprise, let me know. You can go directly to the book title or my name on Amazon and buy the book there. If you would like an inscribed copy, send a request to singingbonepress@gmail.com.