Often in fiction a single sentence inspires an entire chapter. Such was the case with this chapter. In a book entitled Heroes and Legends of World War I the author mentions a company of soldiers at Mons who take a path that ends in a forest where they are surrounded by Germans. An angel guides them out late at night. When my wife and I visited Mons in 2008 a historian took us to the place where he claimed that event took place. In my book, Chapter 7, “Jeanne d’Arc and the Road Through”,I move the event to the Forest of Mormal which is between Mons and Le Cateau and expanded it greatly. 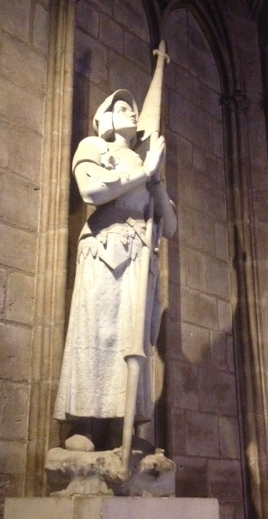 The sound of barking traveled from dog to dog, farm to farm, field to field, coming ever closer.
The men dug on. Walter Sage caught a glint of light beyond the line and to the south.
“Something’s astir,” he whispered. “Coming across the field.” He asked, “Peasant with a lantern?”
“Where?” Jessop asked. “German spy?”
“Back the way we marched,” Hardy said. “Someone’s coming. Maybe the peasants don’t know massed armies are on the way, right in this bloody fool of a Frenchman’s path.”
“I say he’s Belgian,” said Jessop.
“Belgian, French. Leave it behind, you irritation,” groused Sage.
“Farmer coming to look after his fields, see who’s stealing his crops. Probably carrying a club, ready to strike,” observed Lang. “Heard our digging. After his buried treasure, his francs and gold. We’ll call to him when he gets near.”
“Maybe he can show us the way, lead us to the French gals with the wiggle-waggle in their walk,” said the lascivious Henry. “Or the way to the nearest estaminet. I could use a pint of ale, bottle of wine. I’m parched.”
Taking up the strain, William Sage said, “Maybe this is the enchanted forest where the water tastes like wine. But shouldn’t we shout the farmer a warning. Who speaks French?”
“Vous-les vous!” said Jessop.
“That’s no warning,” said Sage.
“At least he knows somebody’s here,” said Gabriel. “That’s all we need him to know.” Then, putting on a fake French accent, he continued, “The Germans are coming this way. There is a war. Hide your family and flocks in the forest, if you know it well enough.”
“Look at that, will ye?” said Walter Sage.
“He’s coming right toward us,” Jessop said.
Walter whispered, “ It ain’t a man. It’s a shepherdess. Her dress? See her crook?”
“Looking for her lost sheep,” said Gabriel.
“Or turnips for her dinner. We passed a vegetable patch a while back,” Nancarrew said.
“Little Bo Peep, she lost her sheep and didn’t know where to find them,” recited Howard Lang.
“Leave them alone, and they’ll come home, something, something, something behind them,” added Hardy.
Objects Jessop, “Wagging their tails. Nursery rhymes. My God! Have we come to infancy and the nursery?”
“A will-o-the-wisp it is,” hissed Walter Sage. “Do they have elves in France, too?”
“Pixies? They are small. She is human size.”
“She’s coming fast, must be running!” exclaimed private Godley.
Alan Hardy observed, “But the lamp holds steady. No up and down. No swaying side to side.”
The men stopped digging and stood dumbfounded, jaws agape, eyes wide.
“Faster than we can run!” Hardy said. Clearly a woman, the figure passed to the left of the trenching line, not ten yards from the men, toward the forest. “She doesn’t notice us, with all the scraping, shoveling, dirt flying about. And our voices,” he concluded.
Suddenly the light from the lantern flared, encircling the woman in fire.
“She’s ablaze. Skirt must ‘a’ caught from the lantern!” said Jessop in a loud whisper.
“A French peasant nothing! Look at ‘er. Wings, by God! Look at ‘er close. She’s a bloody angel!” said Walter Sage.
In an instant the light became bright as lightning, she within a shell of light, the light
obscuring her features. The angel, or spirit, substantial as an actress on a limelight lit stage.
“She’s real, God bless us!” said Jessop.
“Bloody funny to me,” said Walter Sage. “Looks like a Gibson girl with wings.”
“When did you ever see a picture of a Gibson girl, you bloody codger?”
Before Sage answered, Howard Lang rubbed his eyes. “I see her, too!”
Sage: “No white gown. No sandals. She’s in armor. Sword in scabbard, shield on left arm, steel helmet under her right, the lantern in her right hand. No gold band around her hair. Blimey.”
“I see the white wings, too. Jeanne d’Arc!” exclaimed Henry Sanders, amazed.
“John Dark? Who’s that?” asked Jessop.
“You old mechanic, its Joan of Arc,” said Sergeant Sanders.
“You’re going daft. No sleep, no drink, no food, no brains left to think with,” said Jessop.
“You should know better.”
The angel turned toward them, her features drowned in the light’s intensity.

Then what happened? To find out, the good news is that the book is now available on Amazon as a paperback and on Kindle.

You might wonder why Joan is not referred to as St. Joan. It is because she was not canonized until 1922 at Notre Dame in Paris. Sarah and I were there on Wednesday, August 6. Here is a picture of her statue.