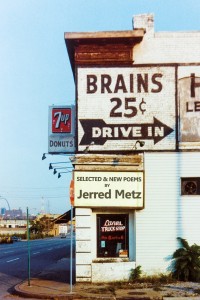 WANNA WIN A FREE copy of my brand new BOOK OF POEMS? Tell me what you think the book’s title (Brains 25c Drive In) means. I’ll select a winner on March 21, 2014.

In late January the first copies of the book of my selected and new poems—
Brains
25 ¢
Drive In
–was published by Aldrich Press.

The book’s cover is a photograph of a sign on the wall of an old workers’ lunch buffet in St. Louis, Missouri. The building is gone, and the sign with This photograph remains. These poems preserve its spirit as I absorbed it.  After he saw the cover, actor Don MacKay wrote me, asking what the words on the sign had to do with the poems. I told him to think about it and send me his interpretation. He did. He was right.
The titles of books of poetry invite the reader, like an appetizer, a foretaste, setting the reader’s mind in the right direction.

The Contest: Send me your interpretation of the title. On March 21 I will pick the winning explanation and send a copy to the person who came up with it.

Read two poems from the book. Maybe they will give you some ideas. Anyway, enjoy.