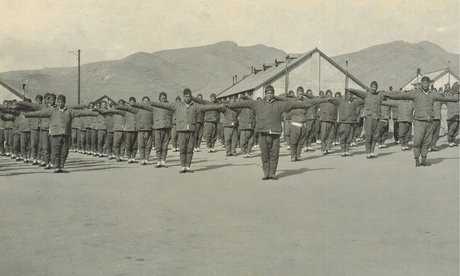 Chinese laborers in training to work in France and Belgium

meeting people who have an answer at the tip of the tongue to innocent questions that occur to me. A second great pleasure is in the answers to the questions. While thinking about the extent of the trenches all sides in the war in Europe, I wondered who did the work of building them. Digging, excavating, building inside the hundreds of miles of trenches took more than the work of the soldiers at war. I asked military archaeologist Jim Legg who did the work for the British. His answer surprised me, and then made sense.

In 1916 the British began recruiting Chinese because so many British had died in the war that there was a shortage of men to do the work. Ninety-five thousand Chinese farm laborers volunteered. They left remote villages to work for Britain in the First World War! Ninety-five thousand! Who would have thought? They made up the Chinese Labor Corps.

Two graves of Chinese workers were pointed out to me in the American cemetery in Bony, France, where rest the remains of Americans who fought in the Battle of Bellicourt Tunnel.

Truly, their work in the war is unacknowledged and forgotten. They are not recognized in any of the British war memorials. They were not permitted to settle in Britain after the war.

They did dirty, dangerous, vital work behind the lines on the western front. How they reached France and Belgium is itself fascinating. They went by ship across the Pacific to Canada. They crossed the country in sealed trains—six days travel. Then they went by ship from Liverpool, train to Folkestone, and ship to France and Belgium. Not surprisingly, many died in making the journey.

In addition to digging trenches, they unloaded ships and trains, lay railroad tracks and built roads, and repaired vehicles and tanks.

They worked 10-hour days, seven days a week, and had three holidays a year including Chinese New Year. They stayed until 1920, clearing live ordnance and exhuming bodies from battlefield burials and moving them to the new war cemeteries.

Naturally, everything connected with World War I had to be done on a massive 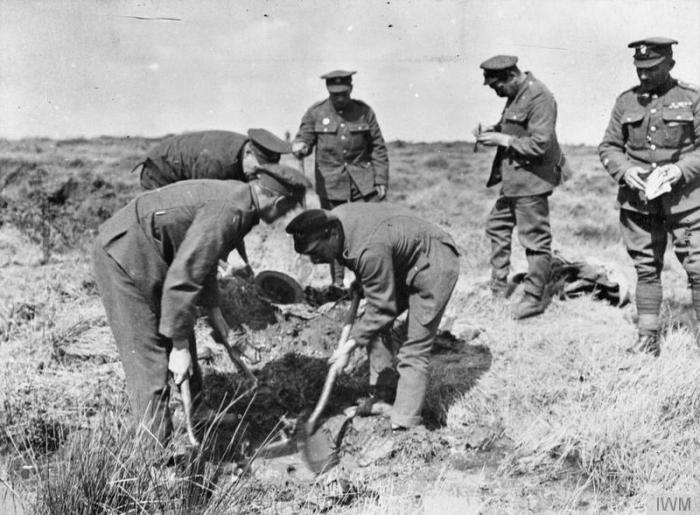 Graves being prepared to receive the bodies of soldiers

scale. Everything we could think of used in the war came in huge quantities and numbers.

Today, not many Americans visit many of the cemeteries that populate the landscape where battles were fought in the war. Thus, it is likely that the work that went into creating those final resting places for the soldiers of many nations is barely known. While burial had its gruesome parts, it also expressed the nobility of those who keep the cemeteries to honor the sacrifices the man who lay in them made.

Naturally, having visited many World War I military cemeteries, and, since I am writing about the war again, I will have my Gravedigger out of Hamlet guide us through the tragedy of the burial fields.

The military museum in Peronne, France, where much fighting took place, it being part of the Somme battlefield, shows a motion picture, maybe eight minutes long, of a burial squad working just outside of the battlefield. I was touched by both the “everydayness” of the work, and the solemn way it was carried out.