For writers, poets, painters, sculptors, and film makers, angels can present any ideas or 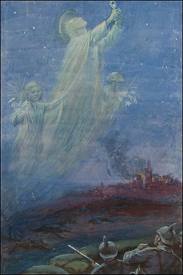 conceptions the imagination calls up. Angels can be of any size, shape, form, or even religion. They can be the fat babies with wings, the cherubim, we see in so many Renaissance paintings. They can be magnificent, stately beings of glorious proportions standing beside Jesus or God. They take many forms in the Hebrew Bible. There are innumerable representations of St. George. Type his name in Google and see many ways artists have depicted him. They can be demi-gods or even demonic. The great angels of the apocalyptic writings herald the coming of the end of time. They do much of God’s work.

Thus, St. George, Joan of Arc, and the myriad angels they command saving the British Expeditionary Force are part of the tradition writers and artists follow, making angels part of mankind tales.

It pleased me to have angels serve the story, saviors of the soldiers, instruments of peace after four years of war.